Nature and Scope - Propaganda and Recruitment

During the Great War, morale became a significant military factor and propaganda emerged as an instrument of control over public opinion and an essential weapon in the national arsenal. Covering an array of international perspectives with material from the US, Great Britain, Germany, France, Belgium and more, this digital collection provides an essential insight into propaganda and recruitment throughout this turbulent period.

Rich in primary source content from world-class libraries and archives, The First World War: Propaganda and Recruitment provides an essential insight into propaganda and recruitment throughout the Great War.

Propaganda, in its written and visual form, is an effective tool that employs multiple basic techniques: to exploit existing beliefs; establish authority; create fear; use humour; appeal to patriotism; to be selective and create a ‘version’ of the truth; to name but a few. The study of propaganda during the First World War becomes at once a study of the relationship between the government, the press and the public. The government’s control over the mass media and the entire propaganda machine were deemed vital in demanding the national support needed for ultimate victory. Such victory was only attainable by sustaining allied soldiers and civilians, so recruitment propaganda, appealing to the patriotic hearts and minds of many, was crucial at the very outbreak of war.

The vast and varied range of material in this resource, from aerial leaflets and atrocity propaganda to international posters, postcards, cartoons and political pamphlets, showcases the methods exploited in wartime propaganda and their paths of dissemination. Themes of recruitment, training and morale are also examined through items such as tribunal case files, Kitchener's papers, recruitment listings, training manuals and minute books of both parliamentary and local recruiting committees.

A fascinating array of document types include: 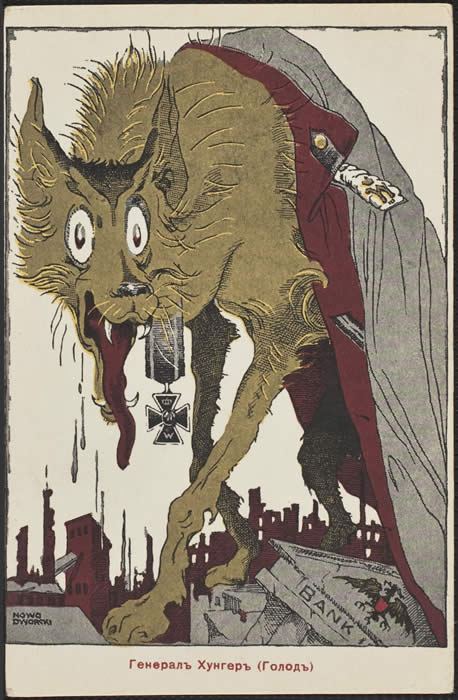 The First World War: Propaganda and Recruitment features a wealth of foreign language material, providing an essential international dimension and promoting in-depth, comparative research. A keyword tool in the Search Directories section enables users to conduct searches across the site in several European languages, generating a wide variety of perspectives on an international scale.


Libraries and archives represented include:

Aerial leaflets and propaganda posters are included from the Zeit der Weltkriege collection. The aerial propaganda is organised by the nation creating them and the recipient. The collection also features German and Allied propaganda postcards, pamphlets, brochures and rare printed items focusing on German material, 1914-1920.

Britsol Central Library have kindly given permission for us to feature the minutes of the Bristol Citizens' Recruiting Committee, 1914-1920, to accompany an array of material sourced from Bristol Record Office.

We include two volumes of the Parliamentary Recruiting Committee, 1914-1916. These minute books provide an insight into key decisions and processes.

Material is drawn from the library’s renowned War Reserve Collection which offers a truly international dimension, covering material from North and South America, the Far East, North Africa, the Middle East, Australasia and Scandinavia, as well as principal European protagonists. A vast array of propaganda material is featured, such as: Allied and German propaganda literature aimed at front-line troops, the home front, businessmen, wives and mothers, politicians and neutral nations (particularly the campaign by the Allies to persuade the United States to enter the war); periodicals and magazines, such as Bull and The Fatherland; reports on French atrocities in Spain and the Belgian atrocities; anti-imperialist tracts aimed at weakening Britain’s Indian and African support; and much more.

The City of Westminster Archives holds extensive collections relating to family, local, business and community history. Our selection features minutes of the Recruiting Committee of the Metropolitan Borough of St Marylebone, London 1915, accompanied by minutes of the Central Relief Committee and the Belgian Refugees Committee. Also included are other volumes relating to morale in the capital.

The Coventry History Centre is part of the Herbert, Coventry’s award winning museum, art gallery and educational charity. We feature the complete personal collection of fascinating and insightful diaries from the German mayor of Coventry during the war, Siegfried Bettman. The collection also includes photographs and newspaper clippings concerning the Coventry aircraft workers’ strike.

The Essex Record Office provides invaluable resources on the history of the county. Material sourced includes correspondence and notes on recruiting kept by the Rev E. L. H. Reeve, Rector of Stondon Massey, 1914-1916; Home Office circulars and military notices; minutes of parish meetings and Chelmsford Local Tribunal; and other items relating to recruitment during the war.

We have drawn four clusters of WW1 material from the Hauptstaatsarchiv’s rich holdings on aspects of German history: files on Vaterländischer Hilfsdienst, Kriegspropaganda, Presseangelegenhetien, 1917-1918; documents from the Kriegspresseamt showing the German effort to control opinion and censor various publications, including analyses of newspapers, pamphlets, posters, cartoons and photographs; efforts to prevent dissent and improve the morale of troops, such as patriotic instructions and reports of the Büro für Sozialpolitik; film, cabaret and theatre entertainments for troops; and additional material on welfare and morale.

Drawn from the library’s wide-ranging First World War holdings, we include propaganda and parliamentary recruiting items from the World War 1 and Michel Brisebois collections, featuring aerial leaflets, postcards and bookmarks of various nationalities. This material provides an important Canadian dimension.

This renowned visual archive has permitted us to feature an array of fascinating material, offering a sound insight into British media coverage during the war. We feature: front pages of the Daily Mirror newspaper, 1914-1918; images of the outbreak of war; key news stories (German actions in Belgium and France, air raids, sinking of the Lusitania, execution of Edith Cavell, Easter Rising, women at war, armistice); photographs providing a record of different war fronts and armies; Big Willy and Little Willy cartoons, famous throughout the war.

We have sourced a wide range of government material from The National Archives, with an emphasis on British recruitment and training, from volunteers and Pals Battalions through to the Derby Scheme, conscription and Military Service Act of March 1916. There is are also an extensive number of documents on propaganda and the control of public opinion. A few document highlights include: Kitchener Papers on Manpower, Morale and Recruitment; papers of the Official Press Bureau, 1915-1918; volumes on the effects of British and German propaganda in the US, 1914-1918; dissemination of enemy propaganda in the UK, 1914-1918; making of the propaganda film ‘Britain Prepared’ by the Royal Navy; aerial propaganda; training at Royal Flying Corps home units, 1915; papers of the Council for Civil Liberties campaign against conscription, 1916-1918; and much more.

Holding over 800 years of Northamptonshire’s rich archival heritage, we have drawn over 350 conscription and military tribunal case files, 1916-1918, from their collection. The tribunals were established under the Military Service Act of 1916 and tribunal papers were destroyed across much of Britain, following a Ministry of Health decision in 1921. The collections for Northamptonshire, amongst several others, are significant survivals. The selected case files illustrate the different reasons for appeal and the different outcomes. Northamptonshire provides an interesting case study due its boot trade, with some 30 firms working on army supplied of boots and other footwear.

The Museum of Brands, Packaging and Advertising, located in London, houses Robert Opie’s extraordinary collection relating to British lifestyle and culture. Fascinating items such as posters, games, objects, specialist publications, souvenirs and ephemera have been selected, with an emphasis on propaganda, morale, war bonds, the British home front and recruitment, charity causes and the anti-waste campaign. The materials help to show how the war was presented to the British public.

Drawn from a wealth of material on Gloucestershire’s regiments, the Soldiers of Gloucestershire Museum have kindly given us permission to feature photographs depicting the training and departure of troops, in addition to a Farewell Concert Programme for the 12th Battalion and a book entitled ‘Hints to Non-Commissioned Officers and Men of the Gloucestershire Regiment’.

* Please note: If you have purchased Module 2 only, you will not have access to Module 1 and Module 3 documents and primary source links within the secondary contextual material.